eLTER RI (European Long-Term Ecosystem Research Infrastructure) takes a new step forward: with approval by the European Commission of two European projects, eLTER PPP (Preparatory Phase Project) and eLTER PLUS (Advanced European Project), totalling 14 million euros for eLTER, the EU is opening an important chapter in the development of the pan-European infrastructure for long-term systems research on ecosystems, the critical zone, and socio-ecology in Europe.  Altogether 34 partners from 24 European countries are involved in both European “advanced communities” projects.

This 5 year funding (February 2020 – January 2025) will allow for significant progress in the development of the pan-European research infrastructure eLTER RI in terms of organisation, strategy definition, financial aspects, as well as legal models and decision-making processes (eLTER-PPP). The eLTER-PLUS project will provide a major boost to scientific work focused on 4 major research challenges that will be carried out thanks to the various eLTER sites and platforms distributed throughout Europe. These sites cover all geographical areas in Europe, with data collection and different analyses (biological, biogeochemical, hydrological and socio-ecological) defined according to harmonised monitoring and analytical standards.

eLTER RI responds to a need for a better understanding of socio-ecosystems by promoting the gathering of diverse scientific communities to tackle the most pressing problems in modern society. In the Anthropocene era, environmental challenges we face are colossal (climate change, pollution, soil erosion, loss of biodiversity, etc.) and requires a multidisciplinary approach. The objective of eLTER ESFRI is to organise at the European level the socio-ecological research infrastructures that serves to equip the scientific community and provides a unique and operational tool for both society and decision-makers so that we can ultimately better understand long-term effects of global change at the territorial level, integrating climate, water, soil, living beings and societies. 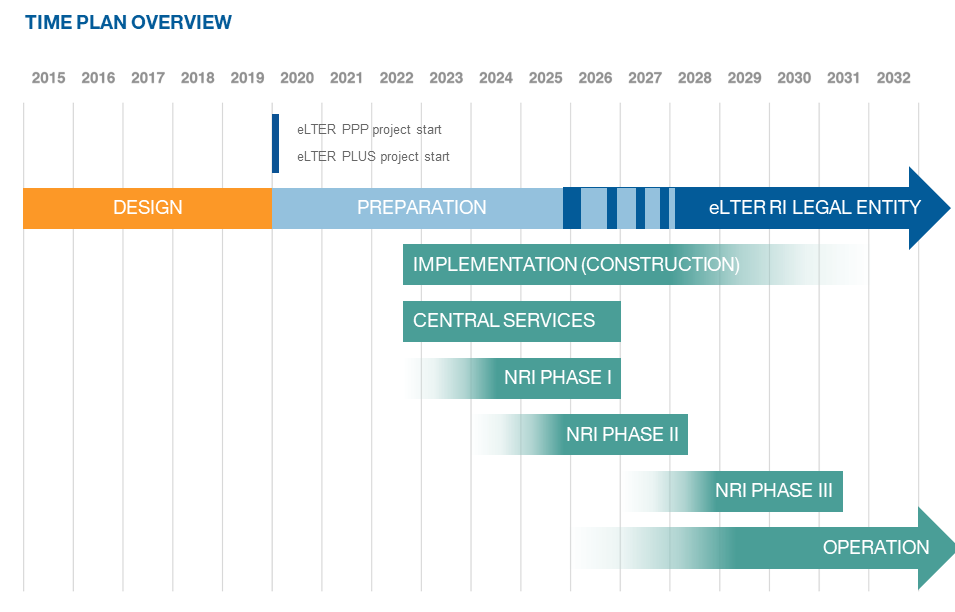 The eLTER PPP project, coordinated by Michael Mirtl of the Helmholtz-Centre for Environmental Research (UFZ) and co-coordinated by Philippe Choler, CNRS, is focused on the implementation of the preparatory phase of the project (definition of functional and technical specifications, governance, organisation, finance, legal structure, etc.).

The aim of this project is the operational, technical, and strategic development of pre-existing observational and research sites across Europe in order to meet the current challenges of global change through a “whole system approach” for long-term observations and research conducted on ecosystems, the critical zone and socio-ecosystems.

The objective is to facilitate access to sites (Transnational Access – TNA) and data (Virtual Access – VA) to a wide range of user groups and achieve harmonization of the observation and research methods used. There is also a focus on improving selected sites at the European level.

The main actions of the project are:

– Harmonization of the different organizational levels

Figure: The 4 themes of the eLTER PPP project and the associated, closely interlinked activities (WPs) for the implementation of the preparatory phase for the construction of the pan-European eLTER RI infrastructure (eLTER ESFRI eLTER process).

The advanced European project eLTER PLUS is coordinated by Jaana Bäck (University of Helsinki, Finland) and co-coordinated by Michael Mirtl (UFZ, Germany). It is based on three main pillars (1) networking, (2) conducting observations and research on four priority themes and (3) access to sites (transnational, remote and virtual). The aim is to develop a coordinated, interdisciplinary approach in studying biodiversity loss, biogeochemical cycles, climate change adaptation and food security, and related social changes.

eLTER PLUS is a kind of performance test forthe eLTER RI infrastructure. It will foster connections between the different scientific communities, benefiting from access to sites and platforms, data and services, and contribute to the development of technical specifications and protocols for observation (standard observation), of priority services (information systems for database management),  and site management. 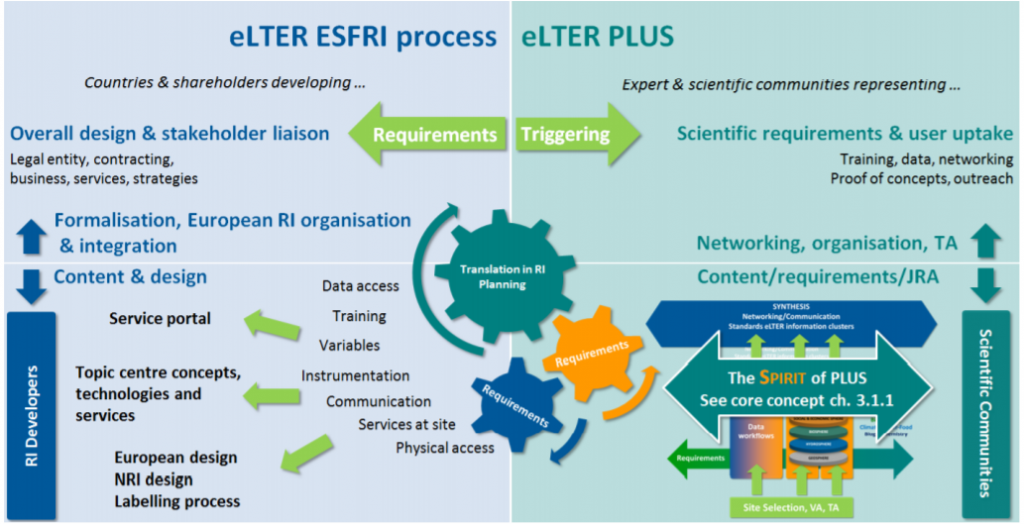 Legend: Links between the eLTER PPP project and the eLTER PLUS project; the connections created between the different scientific communities using sites and platforms to conduct studies on the 4 priority scientific challenges support the development process defined in eLTER ESFRI. 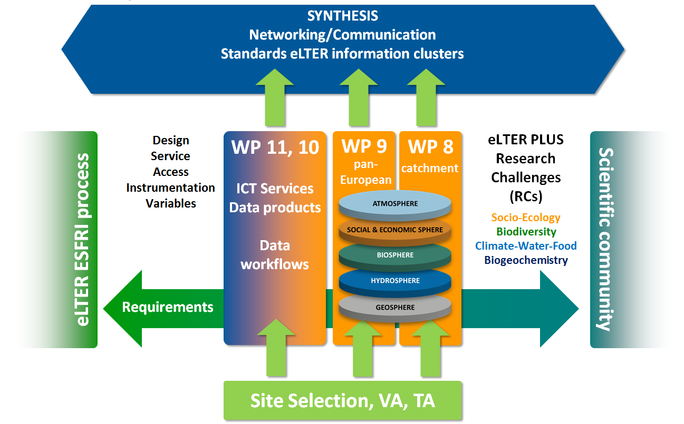 Legend: Synthesis diagram of the eLTER PLUS project. The priority scientific challenges (RCs) developed by all the scientific communities aim at enabling a whole system approach by promoting collaborations between communities at the scale of plots or catchment areas (WP8) and at the pan-European scale (WP9). The development of databases, deployment of tools according to harmonized protocols and services (WP10 & WP11) promote the structuring of the eLTER RI pan-European research infrastructure according to the eLTER ESFRI process.

” In Europe, the heterogeneous organisation of research sites leads to differences in data collection, archiving and quality. Another obstacle to progress is also induced by the carrying out of observations and research carried out in too mono-disciplinary a manner. If we are to find ways to protect and conserve the ecosystems on which our lives depend, we must change this as a matter of urgency “.

” The collection of high quality, long-term data is extremely important for the development and validation of predictive models of ecosystem development and provides valuable support for political decision-making “.

” The eLTER PLUS and eLTER PPP projects pave the way for a new type of transdisciplinary science, which is sorely needed in a world that is facing ever more serious threats to our ecosystems. Over the next five years, we will develop a set of data and services that support better environmental protection “.

Jaana Bäck, coordinator of the eLTER PLUS project

” The eLTER infrastructure will be an essential element of the European strategy for environmental monitoring. By offering a territorial, systemic and multidisciplinary approach, it will provide Europeans with a collection of sites, data and analysis tools to understand the evolution of European ecosystems under very high anthropogenic and climatic pressure. The core of this infrastructure is constituted by the national sites, which are the essential building blocks of it by the diversity of the observed environments and the quality of the physical, chemical, biological and social measurements carried out there. France is particularly well organized through the OZCAR and RZA research infrastructures to make a decisive contribution to the construction of this European infrastructure. With more than 100 years of experience and measurements, France will bring, through the OZCAR and RZA communities, an exceptional conceptual, instrumental and data corpus “.