The OZCAR’s governance aims to ensure the implementation of the scientific objectives defined by the infrastructure. This governance is based on a Coordination Cell, an Executive Committee, a Steering Committee and a Scientific Council.
Furthermore, the OZCAR-RI and the RZA-RI (Réseau des Zones Ateliers) form eLTER-France, the french mirror of the European Infrastructure eLTER-RI. eLTER-France has also set up a governance structure consisting of an eLTER-France board, a CoreTeam and a Steering Committee, supplemented by a committee bringing together the heads of the two RIs and the eLTER-France coordination. 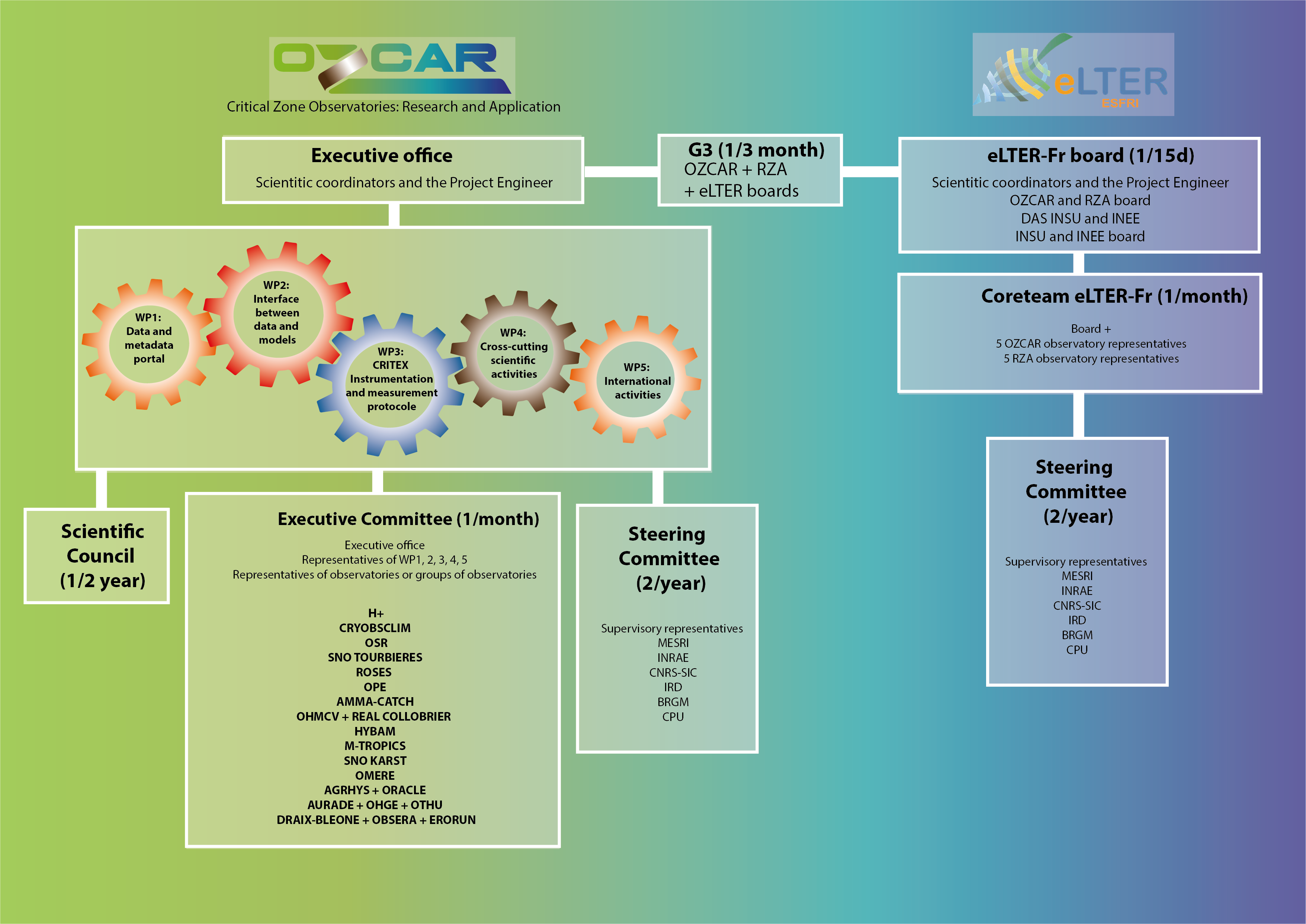 The coordination Cell is made up of the Coordinators and the Project Engineer. It manages the “day-to-day” life of the research infrastructure in application of the advice and directives issued from the governance bodies. It meets every 2 weeks..

The Executive Committee is made up of members of the coordination Cell , the coordinators of the  Work Packages (WP), representatives from observatories or groups of observatories . The aim of the executive committee is to propose a reference scientific framework and to work on the operational implementation of the different WPs. It meets once a month.

The Steering Committee is made up of representatives from the supervisory bodies (CNRS-INSU, IRD, BRGM, IRSTEA, INRA and MESRI (Ministry of Education and Research ). It discusses and validates the strategic orientations of OZCAR-RI. It meets twice a year.

Is made up of the eLTER-France coordination, the heads of RZA and OZCAR RIs, and the direction of CNRS-INSU and CNRS-INEE.It is involved in the day-to-day management of eLTER-France. It meets once a month.

Is made up of the board, 5 OZCAR-RI’s representatives and 5 RZA-RI’s representatives. Its role is to promote the dissemination of the work carried out within the framework of eLTER construction to the communities concerned and to contribute to help the french response to eLTER.

The Steering Committee is made up of representatives from the supervisory bodies (CNRS-INSU, IRD, BRGM, INRAE, CPU and MESRI [Ministry of Education and Research]). It discusses and validates the strategic orientations of eLTER-France. It meets twice a year.

G3 or committee of the RIs heads

The G3 gathers eLTER coordination, and the heads of the OZCAR and RZA RIis. It coordinates the position of both RIs on strategic topics.